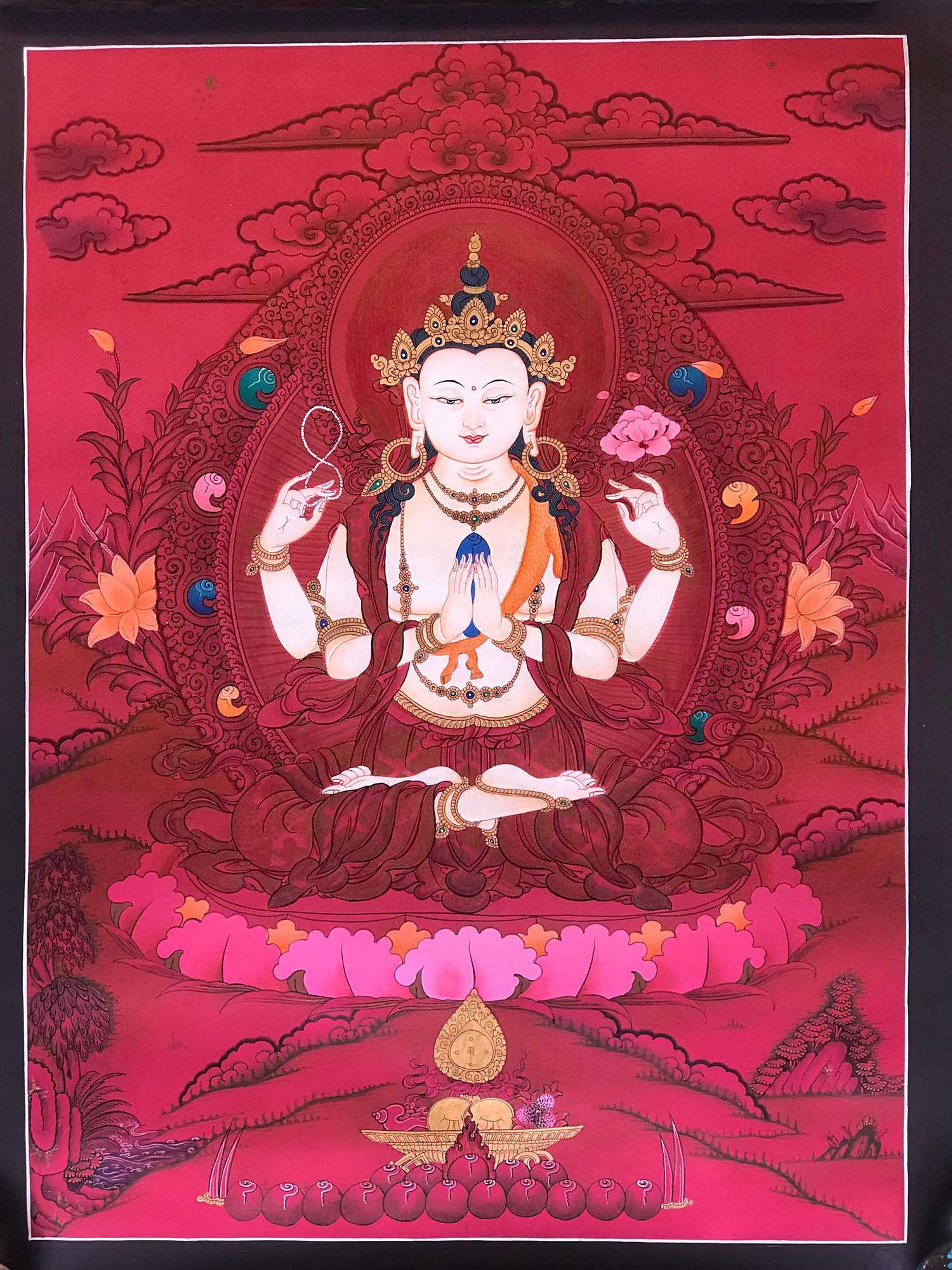 Chenrezig Thangka Painting with Red Background is handpainted in cotton canvas. Chenrezig is the Bodhisattva of Boundless Compassion.

Chenrezig Thangka Painting with Red Background is handpainted in cotton canvas. Chenrezig is the Bodhisattva of Boundless Compassion.

Gesture and Posture of Chenrezig

The four immeasurable are the vehicles through which Chenrezig benefits beings.

The first two, the inner arms, have palms joined at the heart, holding a sky-blue, and wish-fulfilling jewel. This symbolizes that in whatever way Chenrezig manifests to benefit beings, the quality of Chenrezig’s mind is never separate from the all-pervasive primal wisdom.

In the outer right hand, Chenrezig is holding crystal beads and moving them the way we use a mala to count mantras. This symbolizes that there is not one moment when Chenrezig does not benefit beings. Like the steady movement of counting the beads, Chenrezig is continuously benefiting sentient beings and turning the wheel of enlightened activity.

In the outer left hand, Chenrezig holds a lotus flower. This symbolizes that in benefiting sentient beings, Chenrezig manifests in whatever forms are necessary for accordance with the mental capacities, circumstances, and aptitudes of sentient beings.

Chenrezig may appear in any of the different realms, such as the hell realm or the hungry ghost realm. However Chenrezig may appear, he remains free from any of the worldly stains of the various realms of life, the way a lotus flower growing in a swamp appears free of the stain of the mud. The left hand of Chenrezig, holding the flower, symbolizes that stainlessness.

All the various features of this image have meaningful connections to the wonderful qualities of Chenrezig, and by focusing on these details as we visualize the image in the meditation, we can gradually awaken our own awareness of those same qualities in ourselves.

Chenrezig has siz syllabels mantra. The mantra of chengriz is one of the buddhist mantra Om Mani Padme Hum

Mani, meaning jewel, symbolizes the factors of the method the altruistic intention to become enlightened, compassion, and love.

The two syllables, padme, meaning lotus, symbolize wisdom, just as a lotus grows forth from mud but is not sullied by the faults of mud, so wisdom is capable of putting you in a situation of non-contradiction whereas there would be a contradiction if you did not have wisdom.

Though there are many different types of wisdom, the main of all these is the wisdom realizing emptiness.

In the mantra or tantric, vehicle, it refers to one consciousness in which there is the full form of both wisdom and method as one undifferentiable entity.

You need to Login first